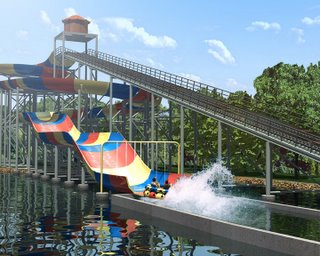 Six Flags New England is receiving 2 new rides for the 2006 season. These rides, formally located at Six Flags Astroworld (RIP), should be ready to go for opening day this year. The first ride is an S&S Sky Swatter ride, this ride will hurtle passengers


forwards and backwards at heights of over 100 feet. The second ride is Splash Water Falls. This ride will throw riders for twists and turns as they travel in a river raft boat. This ride should be a great replacement for SFNE's former lackluster log flume. Six Flags New England is also home to 10 coasters including Superman: Ride of Steel, known as one of the best steel coasters in the world.
Posted by GHD at 8:12 PM 4 comments:

Martin's Fantasy Island, a small park located near Buffalo, NY will receive a new water ride this summer in which you ride a tube into a bowl where you will spin around and around until you reach the corkscrew runout. Martin's Fantasy Island is a very cute park that is home to two coasters, Silver Comet (one of New York's hidden gem wooden coasters), and a spinning Wild Mouse, which was just put in last year. Their small water park contains a wave pool, lazy river ride, and water slide.
Posted by GHD at 6:40 PM 1 comment:

Six Flags has been the topic of many coaster enthusiast's discussions of late. Their new CEO, Mark Shapiro has been released several interesting statements about the changes that will be made throughout the next few years at Six Flags parks across the country. In a recent statement, Shapiro stated that one of his long term goals for Six Flags is to be come more family oriented. In order to accomplish this goal, one step Six Flags is taking is adding characters throughout the parks. Some characters that will be seen more throughout the park include both Loony Toon and DC Super Hero characters. These characters will participate in daily parades throughout the park, and will also be available for autographs and pictures during the day. Shapiro also mentioned that Six Flags has become too dependent on coasters over the last decade or so.

Hopefully, rather than starting to stray away from the "thrill" aspect of the parks, Shapiro will be able to continue to satisfy thrill seekers while also catering to families visiting Six Flags Parks.
Posted by GHD at 5:28 PM 2 comments:

Hello World, welcome to coaster source. This blog's object is to present you with new, useful coaster and amusement park information. This site will contain news, rumors, reviews, trip reports, and links related to the coaster community. I hope you enjoy the site, if you have any comments, questions, or suggestions, I'd love to here from you. You can email me at thinkdifferent4890@yahoo.com.
Posted by GHD at 5:06 PM 1 comment: