After more than 2 seasons of being down, SFGadv has finally reopened Batman:The Chiller. This the second track of a duel track ride. The other tracks name is "Robin:The Chiller" that is rarely closed. The ride was opened in 1998 and is manufactured by premier rides. If you have never seen The Chiller, think of it like a standard Boomerang coaster on steroids. It is longer, faster and much more intense. The ride has a LIM launch system (similar to rides like "Rock 'n' Roller Coaster" at Disney MGM) that reaches speeds up to 70 mph.

Update: Although employees at Gadv said that the ride would be open today, it did not run. The train for the ride is in the loading station, indicating that the ride is very close to opening. Many enthusiasts are now anticipating the ride to open on Sunday, just in time for Six Flags' Spring Break week.

Update 2: I visited the park on Sunday (pictures and Trip report to come). One of the employees told me that Batman would be open by mid morning, however the ride did not open all day. The reason for the delay may have to do with the New Jersey state inspectors having to approve the ride. New Jersey has been notorious for having extremely strict regulations for roller coasters and amusement parks in general.

Update 3: On Friday May 5, The Batman side of Chiller was running properly.
Posted by GHD at 2:21 PM 4 comments: 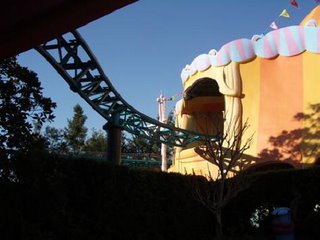 A few years back, when Islands of Adventure was getting ready to open, Sylvester McMonkey McBean's Very Unusual Driving Machines was going to be one of their signature attraction, set in the Dr. Seuss area of the park. Guests enter the driving machines and can ride above all of Seussland on the track that runs along the tops of many of the buildings in the Seussland area of the park. The ride will appeal to families more than thrill seekers, it should travel at a moderate pace with no huge twists or turns. The ride never opened due to safety concerns, however, the park appears to have worked out all the problems, and the ride is set to open early this summer. Islands of Adventure is located right next to Universal Orlando. The park has theming on par with Disney, along with world class coasters, water rides, and dark rides. Many theme park enthusiasts consider IOA America's best theme park.
Posted by GHD at 3:23 PM 1 comment:

Link of the Month

This is a new section of the blog that I am starting today, at the beginning of every month I will pick one of my favorite coaster websites and deem it link of the month. Aprils site of the month is: RCDB.com
This site is the ultimate database for coasters. The site contains an unbelievable amount of coaster stats along with pictures and links to fansites. This is probably the most comprehensive coaster site on the web.
Posted by GHD at 9:38 PM 2 comments: